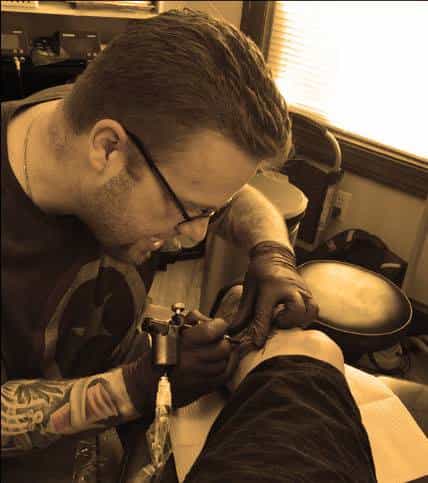 Steve Schoenfeldt, or Shoe as he is known to his friends, began his study of art at the University of Massachusetts at Datmouth, where he studied illustration and Visual Design. From there he aquired a paid internship as a a staff illustrator for a sport boating magazine based in Needham Mass. This lead to 6 years as a freelance illustrator, before he discovered a love for tattooing that drives him still to this day.

As far as his personal life not much is known. Legend tells that as a child he once killed a grizzly bear with his pinky toe, while strip mining wax for his crayola crayons, and that once on his way to kindergarden, he had to fend off a pack of rabid wolves with nothing more than his trapper keeper, and the eraser from his broken number two pencil.